The award was officially presented at a ceremony in Amsterdam, Netherlands, on 21 April 2018, to coincide with the 50th anniversary of the opening of Amnesty International’s national section in the country.

“The Ambassador of Conscience award celebrates the spirit of activism and exceptional courage, as embodied by Colin Kaepernick. He is an athlete who is now widely recognised for his activism because of his refusal to ignore or accept racial discrimination,” said Salil Shetty, Secretary General of Amnesty International.

“Just like the Ambassadors of Conscience before him, Colin Kaepernick chooses to speak out and inspire others despite the professional and personal risks. When high profile people choose to take a stand for human rights, it emboldens many others in their struggles against injustice. Colin Kaepernick’s commitment is all the more remarkable because of the alarming levels of vitriol it has attracted from those in power." 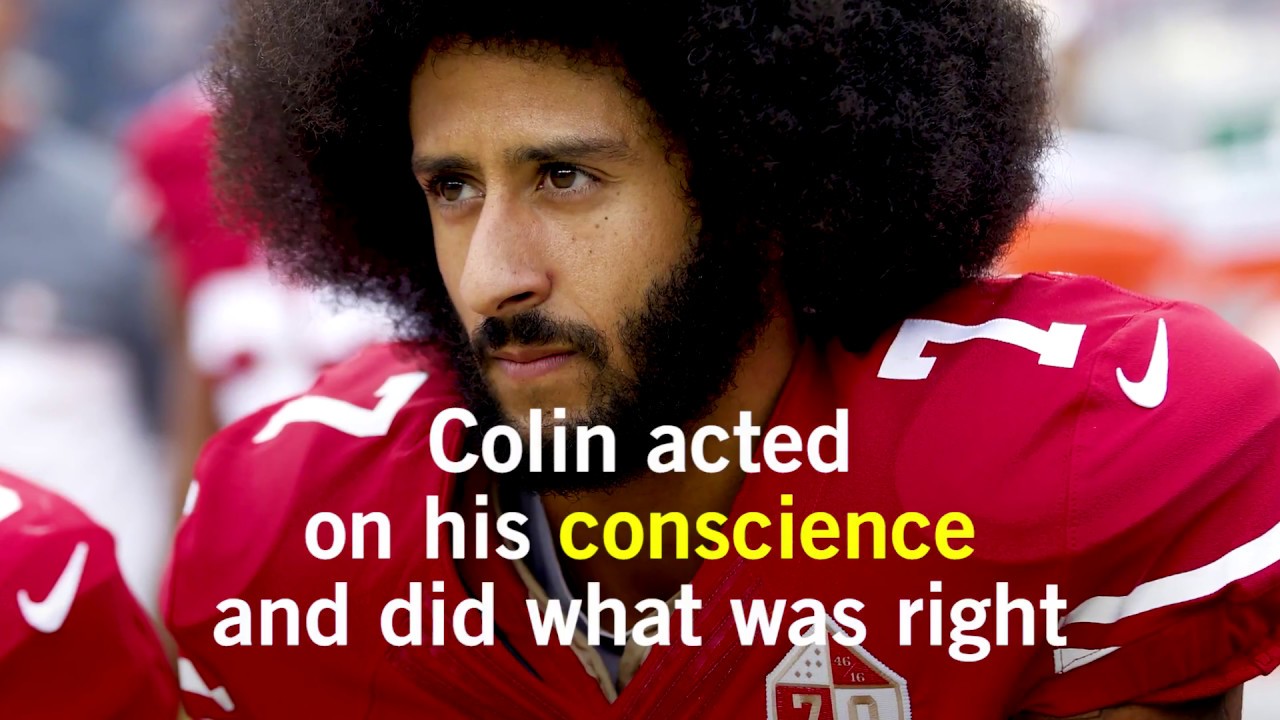 This is an award that I share with all of the countless people throughout the world combating the human rights violations of police officers, and their uses of oppressive and excessive force

During the 2016 pre-season of the American National Football League, Colin Kaepernick knelt during the US national anthem, as a respectful way of calling for the country to protect and uphold the rights of all its people. The bold move was a response to the disproportionate numbers of black people being killed by police. It sparked a movement that follows a long tradition of non-violent protests that have made history.

While the polarised response to the “take-a-knee” protest has ignited a debate about the right to protest and free speech, Colin Kaepernick has remained focused on highlighting the injustices that moved him to act. His charity, the Colin Kaepernick Foundation, works to fight oppression around the world through education and social activism, including through free “Know Your Rights” camps which educate and empower young people.

“I would like to thank Amnesty International for the Ambassador of Conscience Award. But in truth, this is an award that I share with all of the countless people throughout the world combating the human rights violations of police officers, and their uses of oppressive and excessive force. To quote Malcolm X, when he said that he, ‘will join in with anyone — I don’t care what colour you are —as long as you want to change this miserable condition that exists on this earth,’ I am here to join with you all in this battle against police violence,” said Colin Kaepernick.
“While taking a knee is a physical display that challenges the merits of who is excluded from the notion of freedom, liberty, and justice for all, the protest is also rooted in a convergence of my moralistic beliefs, and my love for the people."

The Ambassador of Conscience Award is Amnesty International’s highest honour, recognizing individuals who have promoted and enhanced the cause of human rights through their lives and by example.

Take a Knee protests around the US

The Ambassador of Conscience Award celebrates individuals and groups who have furthered the cause of human rights through acts of conscience, confronting injustice and using their talents to inspire others.

Through the award, Amnesty International aims to raise awareness of inspirational stories and human rights issues and encourage public action.

Past winners have confronted injustice through acts of conscience, used their talents to inspire others and furthered the cause of human rights

The Award was inspired by the poem From the Republic of Conscience, written for Amnesty International by the late Irish poet Seamus Heaney. Past winners include renowned musicians and artists like Harry Belafonte, Joan Baez, Alicia Keys and Ai Weiwei, and inspirational figures including Malala Yousafzai and Nelson Mandela.

Act on your conscience: join our movement today

We live in a time where governments and corporations are vilifying, jailing and even killing people - simply for standing up for what they believe in.

But staying true to your conscience means refusing to give up, coming together to fight for a fairer world for all.

Whether it’s by speaking out for those who risk their lives to defend women’s or LGBTI rights, supporting young people courageously taking action to change the world, or standing with others that need us: we’d love to stay in touch about what we can do together.

Add your voice here today and help fight back against hate.

Anyone can be a Human Rights Defender - act on your conscience now.

What makes an Ambassador of Conscience?

In addition to their careers as musicians, artists and public figures, Ambassador of Conscience Award winners are proven activists who have used their talents to inspire millions of people to join them in defending the human rights of people all over the world.