June 5 marks World Environment Day. Created by the United Nations to raise awareness of issues from air pollution to global warming, the day has grown to become one of the biggest platforms for advocating for all-important environmental causes.

While globally activism on the climate crisis have rightfully gained momentum, one of the still relatively over-looked facts is that people who are on the frontlines of these struggles –environmental human rights defenders—face the gravest risks to protect their homes and communities.

Who are environmental human rights defenders?

Environmental human rights defenders are people who speak up to protect rights associated to the environment, land and territory. They are often community leaders or advocates who seek to protect the rights and the well-being of their communities, especially by looking after their homes, air, water, land, territory and forests from destruction or contamination. Many of them are Indigenous People. While their stories are often told in local contexts, about how they are campaigning to protect their families and loved ones, their work concerns us all because it carries huge global significance. Take for example the Amazon rainforest, the lungs of the Earth, which for hundreds of years have been safeguarded by Indigenous Peoples and who are on the frontline of the battle to save it from deforestation.

Yet being an environmental human rights defender has deadly consequences, making it among the deadliest types of activism. According to the NGO Global Witness, in 2017, the latest year for which it has data, almost four environmental defenders were killed each week for protecting their land, wildlife and natural resources. In 2017, 207 environmental activists were killed. The vast majority of them hailed from South America, making it the most dangerous region in the world.

Global Witness reports that the failure of many governments and businesses to act responsibly, ethically and even legally was a major driving force behind a litany of crimes against activists.

Activists are at risk because powerful forces think they can get away with attacking, killing and criminalizing local protestors, believing the rest of the world will not pay any heed. That is why it is more urgent than ever that we show global solidarity and stand up for the environmental human rights defenders who are risking everything to protect people and the planet.

Today we highlight the stories of seven incredible environmental activists from the Americas who remind us of why we need to stand up for Earth’s defenders. 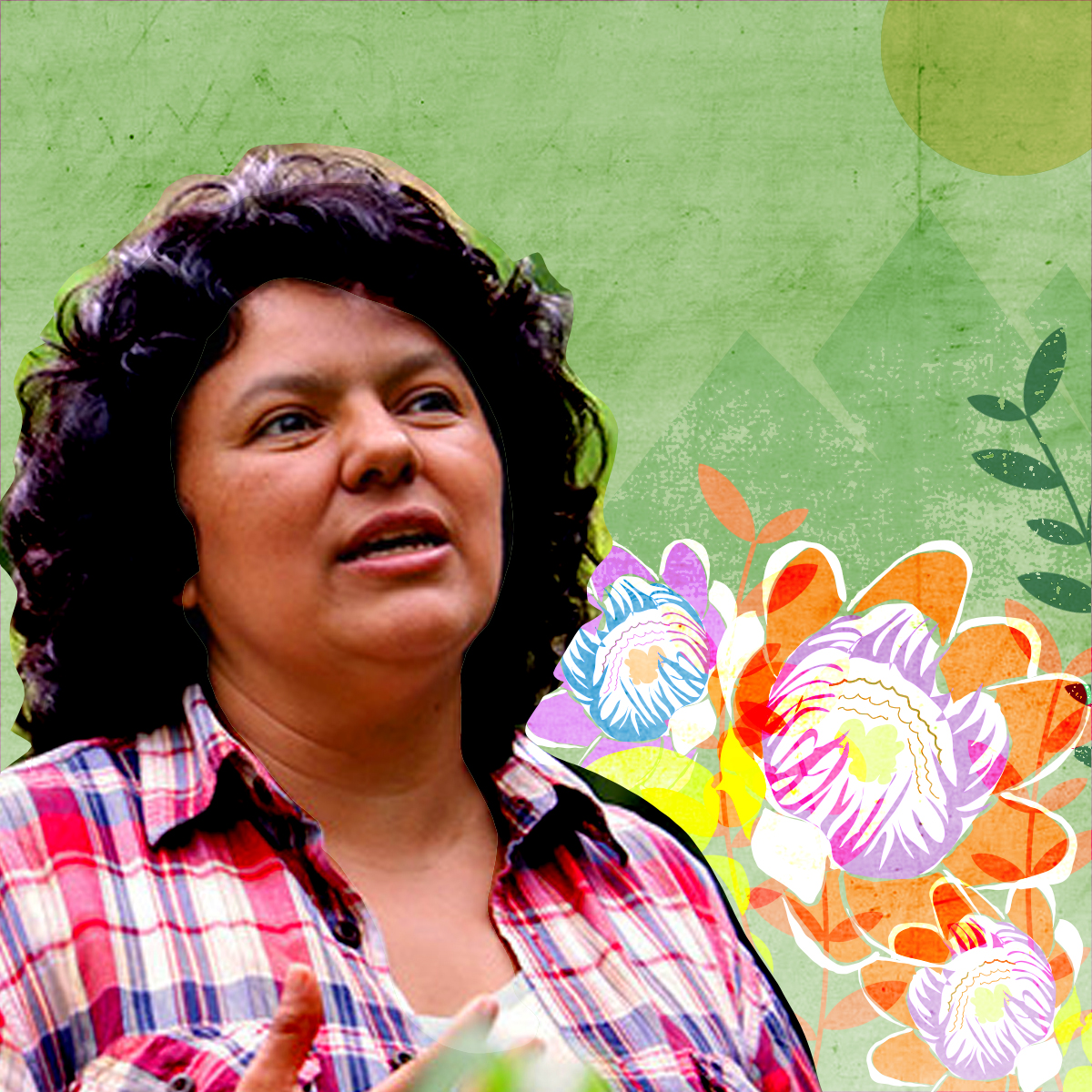 Berta Cáceres cofounded the National Council of Popular and Indigenous Organizations of Honduras (Consejo Cívico de Organizaciones Populares e Indígenas de Honduras, COPINH) in 1993 to address the growing threats posed to the territorial rights of the Lenca communities and improve their livelihoods.

On 2 March 2016, Berta was shot dead by gunmen who entered her home in Honduras. Berta and COPINH were campaigning against the impact that an hydroelectric dam project would have on the territory of the Lenca People. This struggle led to Berta’s killing and remains a great threat to the life of any organization questioning the implementation of economic projects in the Lenca territory.

While some people have been found guilty for her murder, the Honduran justice system still must find all those responsible- not just those directly involved in the murder-to ensure that this crime does not go unpunished.

“We were born and raised in Coloradas de la Virgen, so our children are like shoots, the new young branches of a tree. And sometimes trees get old, they dry out, but the shoots are still there, they keep growing. Now I’m a little older, but my little branches are budding.”

Julián Carrillo was a leader of the Coloradas de la Virgen community. His job was to take care of the territory, the water, the forest and the wildlife. He had publicly denounced logging and mining by landlords in their ancestral land, as well as violence by criminal armed groups against his community.

Coloradas de la Virgen is an Indigenous community of almost 50 hectares, located in the municipality of Guadalupe y Calvo, Chihuahua, one of the poorest and most excluded regions in Mexico. More than 850 Rarámuri Indigenous people live there and consider this land to be part of their ancestral territory. They have been historically discriminated against.

On 24 October 2018, Julián Carrillo, was killed by unidentified armed men. The murder of Julián was a predictable tragedy. He reported attacks and death threats for years. His house was burned down, and he received threats from unidentified armed groups since 2015. Five other people in his family, including his son, were also killed.

PARAGUAY: AMADA MARTÍNEZ, INDIGENOUS DEFENDER OF THE ENVIRONMENT AND TERRITORY 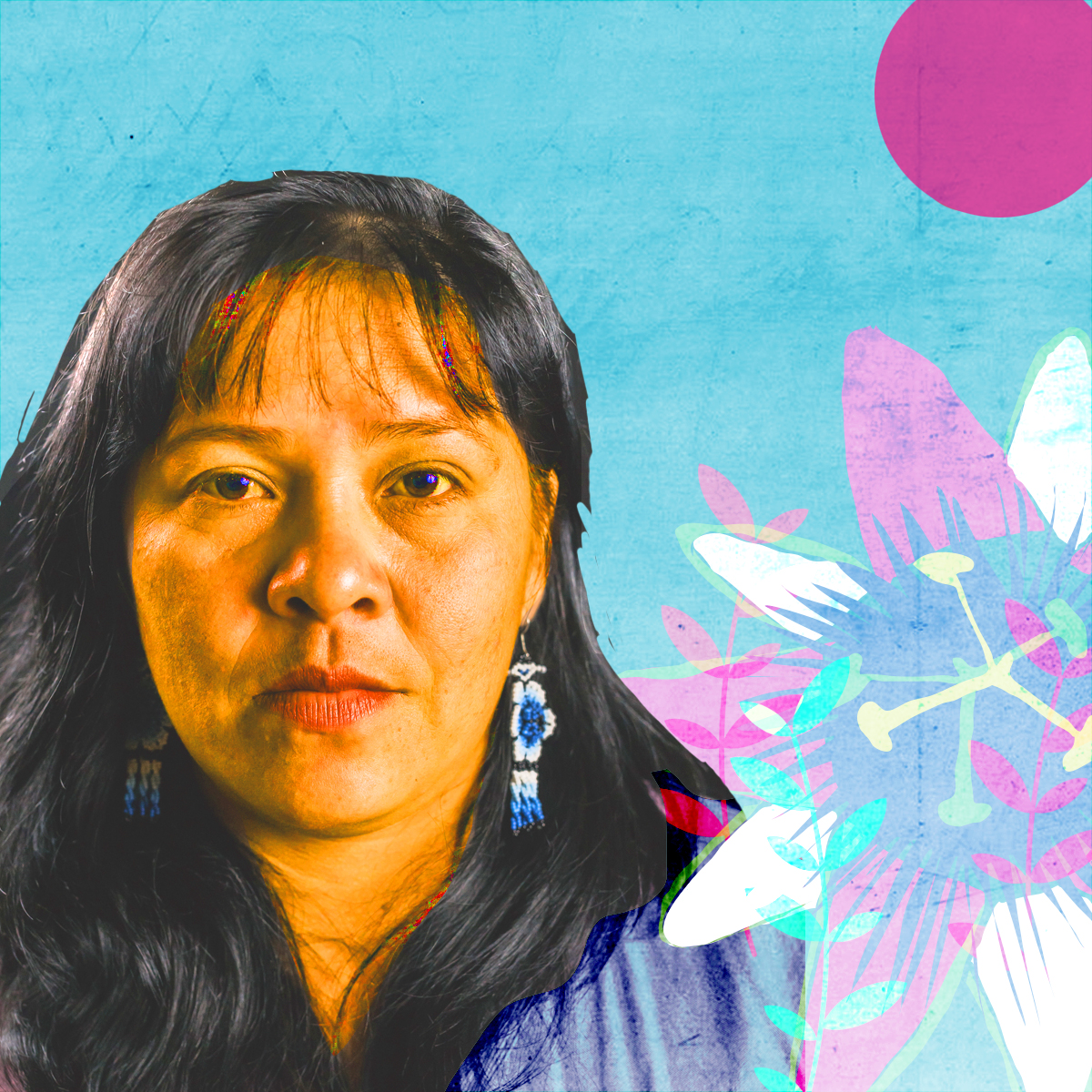 Amada is an Avá Guaraní Indigenous environment defender from the Tekoha Sauce community.

In the 1970s, the construction of the Itaipú Binational hydroelectric plant, in the border between Paraguay and Brazil, forcibly displaced her community from its ancestral territory, putting their survival at risk. Since then, she has defended the right of her community to have a territory in which they can thrive in harmony with nature and has denounced the serious impacts of hydroelectric projects on nature and Indigenous Peoples’ lives.

On 8 August 2018, a group of armed men threatened to kill her. Amada was leaving the community in a taxi along with his seven-year-old son, his sister and two young nephews, when the vehicle in which they were traveling was intercepted by a pickup truck with the logo of the hydroelectric plant. Amada Martínez believes that the threat against her was due to her work defending Indigenous Peoples rights and the environment.

PATRICIA GUALINGA, INDIGENOUS DEFENDER OF THE ENVIRONMENT AND TERRITORY 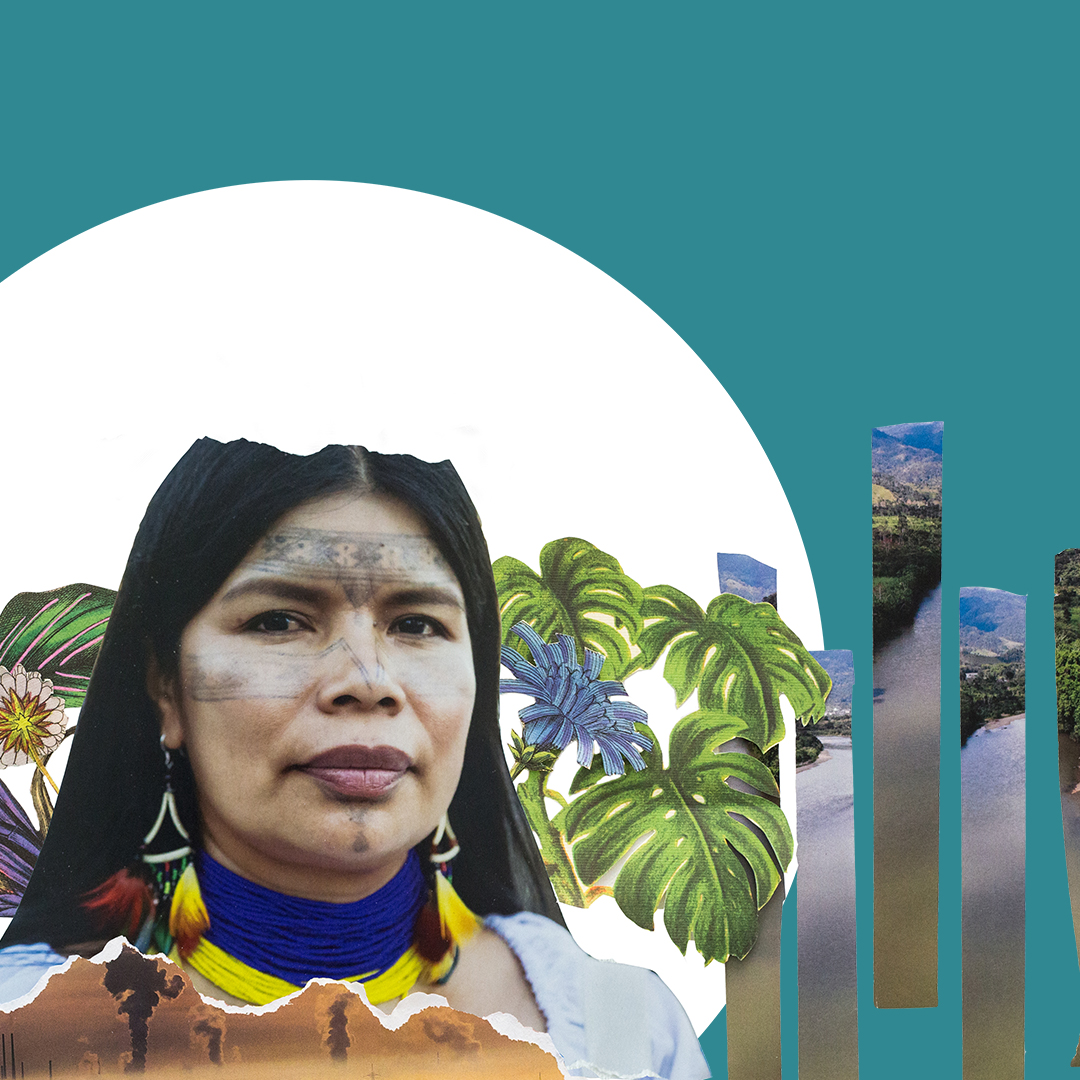 “We are united and we will continue our struggle to defend Mother Earth.”

Patricia is an Indigenous leader of the Kichwa people of Sarayaku community. She defends her people’s rights to their territory and to live in a healthy environment in the face of damaging oil activities there. Patricia is also protecting the Amazonian environment and promoting sustainable development.

In 2012, the Indigenous Sarayaku community achieved a historic victory for Indigenous Peoples against the Ecuador government after reporting an oil concession that had installed explosives on their territory without consulting them.

In the early hours of 5 January 2018, an unknown man made death threats to Patricia and attacked her at her home in Puyo, in the east of Ecuador., The man shouted, “Next time we’ll kill you, bitch!” before fleeing.

Patricia and her family had to leave their home after the attack because the property owner “was terrified that something would happen to her.”

NEMA GREFA, INDIGENOUS DEFENDER OF THE ENVIRONMENT AND TERRITORY 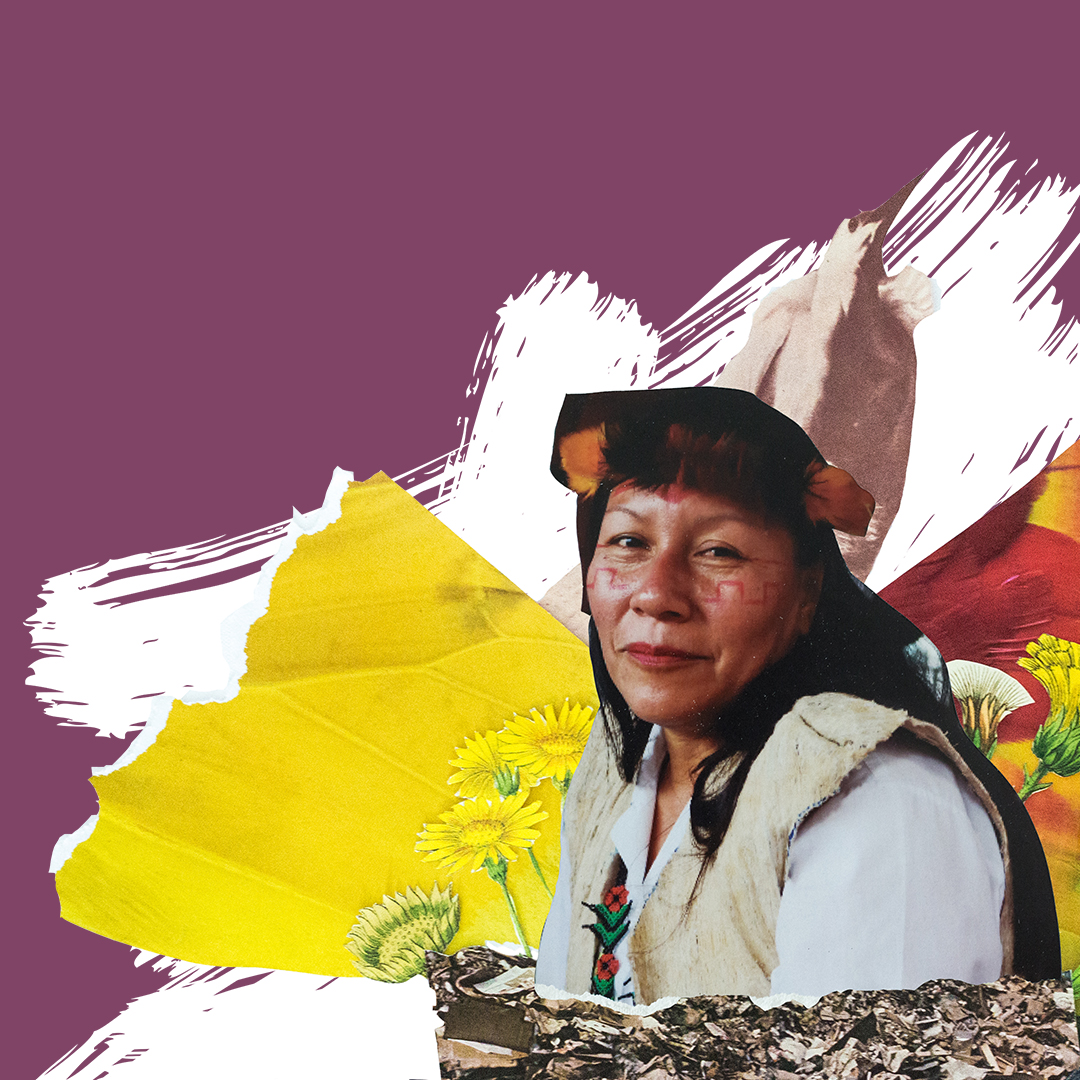 “They threaten me with death but I’m not going to be scared by these words. As a Sápara woman, I am going to fight for my territory.”

Nema is defending the Amazon environment and her people’s right to protect their territory from the possible negative effects of oil activity.

After being legally recognized as President of the Sápara nationality of Ecuador in January 2018, her appointment was challenged by a group of people who Nema says are supportive of oil activities on the Sápara territory. Nema’s appointment was revoked in April 2018 as a result.

Later that month a video was shared on social media featuring a man armed with a spear, identified by Nema as belonging to the group who had challenged her appointment, issuing her with a death threat: “Those present here are united in rejecting her and are thus going to kill Nema Grefa; she has no territory.”

One year on, the Attorney’s Office has yet to open in investigation into the death threat.

On 19 October 2018 Nema was finally recognized as president but still faces serious threats to her life. In April this year, despite the Ecuadorian authorities’ promises to protect her and her family, unknown individuals forcibly broke into her home to steal two computers containing sensitive information on her human rights work.

“This attack is in retaliation for my fight to defend life and our territories from the threat of oil exploitation.”

Salomé is an Indigenous leader from the Kichwa people who is defending the Amazonian environment and the right of women in her community to live in a healthy environment, free from sexual violence. Salomé is the Women and Family Leader in Moretecocha commune, Pastaza province.

Salomé has publicly denounced the possible environmental impacts of oil operations in the Villano River basin, Pastaza province, and the sexual abuse of Indigenous women that have occurred in this context.

In the early hours of 13 May 2018, a number of unidentified individuals attacked and threatened her and her family at home. Despite making a formal complaint, the Pastaza Provincial Attorney’s Office has yet to make any significant progress in this investigation. The authorities have not even offered her protection measures to address the risk facing her and her family. 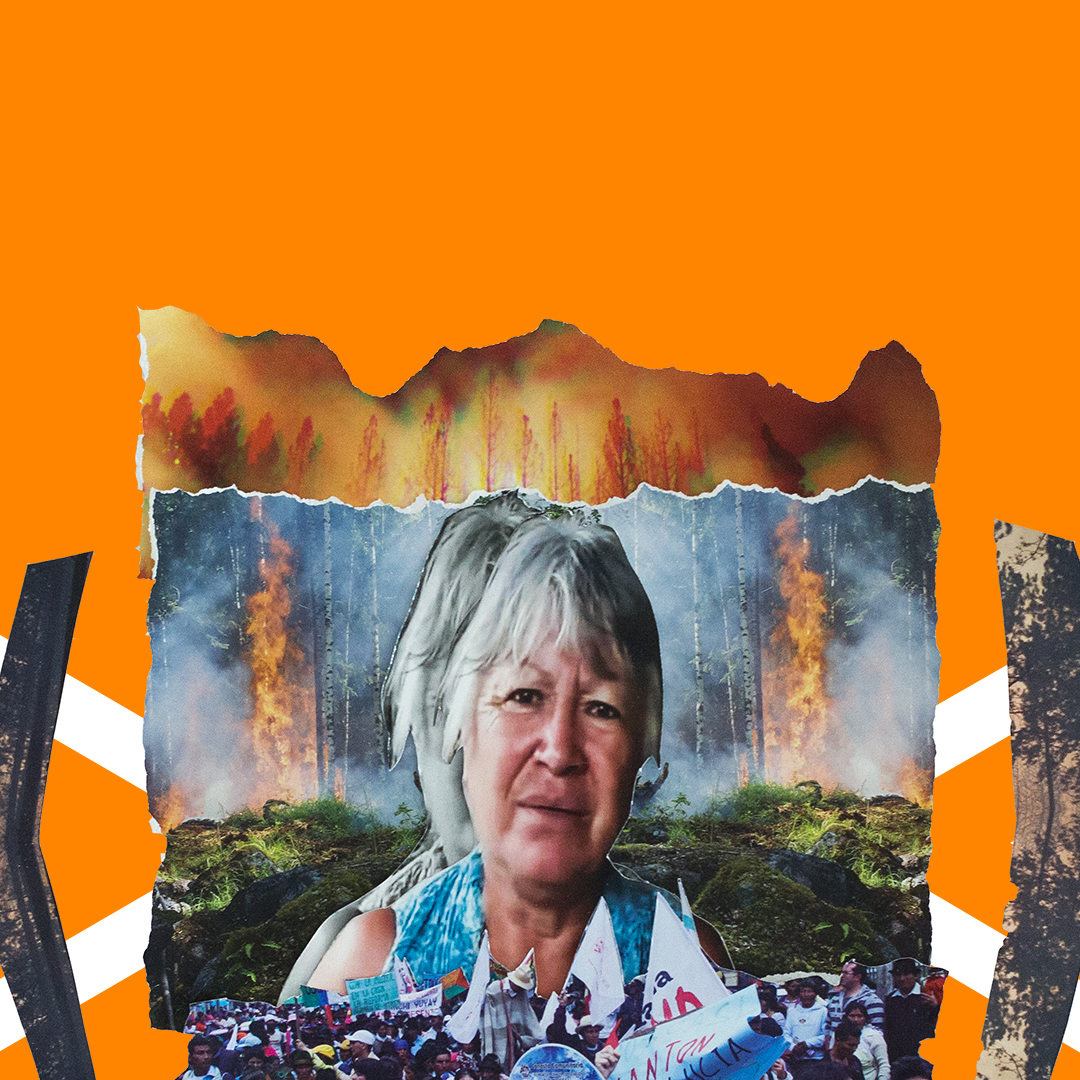 “We have to carry on defending, wherever we are in the world. The contribution we make to nature is the most valuable thing we can do for future generations. We are seeking the common good for all because that is the best legacy we can leave to humanity.”

Margoth has devoted her life to defending the environment and Indigenous Peoples’ rights.

In August 2015, Margoth was physically attacked by police officers at a protest and national strike called by the social and Indigenous movements in Puyo, Pastaza province. She was held on pre-trial detention for more than a week despite poor health caused by her injuries. She was charged with “attack and resistance”, which she was eventually acquitted of.

In September last year Margoth’s house was set on fire, destroying all her belongings.

On 1 October 2018, the Puyo Fire Brigade Commander stated that the fire at Margoth’s house had been intentional. Margoth lodged a criminal complaint with the Pastaza Provincial Attorney’s Office to investigate the attack, yet no progress has been made in her case.

Margoth refused to join the country’s witness protection program because of her previous experience at the hands of the police: “I didn’t want to join the victim and witness protection system because I have no faith in the current government, I have no faith in the independence of the legal system in Ecuador, nor in the military or police forces.”