Walking past the guards, through the waiting room and across the basketball court, we arrived at the meeting room for serious offenders at the Taipei Detention Centre. It wasn’t long before he emerged from behind the iron gate. He smiled warmly, flashing the gaping hole left behind from his recently extracted front teeth. Separated by a glass partition, he motioned towards the phone, indicating that we could talk through it.

Now 59 years old, Chiou Ho-shun was convicted and sentenced to death in 1989. He was one of 12 men accused of murdering insurer Ko Hung Yu-lan and kidnapping Lu Cheng, a schoolchild.

Despite being one of Taiwan's most drawn-out cases, it is surprising how little reliable evidence the prosecution has produced against Chiou Ho-shun. Not only have Ko Hung Yu-lan's head and limbs never been found, but the whereabouts of Lu Cheng is still a mystery. The accusations against Chiou and others were based solely on their “confessions”.

According to Chiou, however, these statements were forced – he was blindfolded, tied up, forced to sit on ice, shocked by electric batons and made to swallow pepper water during his four-month detention in police custody.

In 1994, two prosecutors and 10 police officers were given correctional measures for having used torture during the preliminary investigation. However, the “confessions” of the defendants were not completely excluded from the evidence in court. In 2015, police officers who worked on the case offered to testify that Chiou had been forced to “confess”, but the request for retrial was rejected by the Taiwan High Court.

Throughout this 30-year judicial marathon legal experts, scholars, civic groups and human rights organizations have worked arduously for Chiou Ho-shun. Despite repeated appeals and re-trials, the verdict remains the same – guilty – and the sentence remains the death penalty.

During the 11th retrial at the Taiwan High Court in 2011, the judge told Chiou Ho-shun his sentence could be commuted if he pleaded guilty. If he confessed, in other words, he would immediately walk free after time spent in prison was deducted from a new sentence of imprisonment. Chiou rejected the offer. 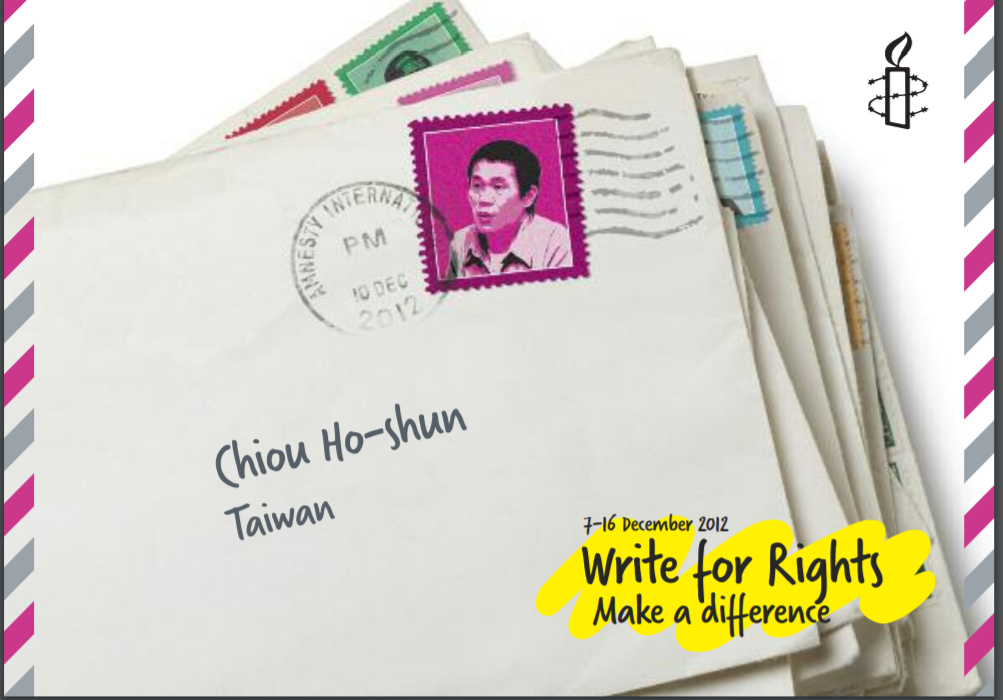 We visited right before Lunar New Year. Chiou told us that we were the 274th and 275th persons to have visited.

Featured in Write for Rights 2012, Chiou remembered receiving as many as four to five thousand letters from Amnesty International members around the world. “There are so many of them! One day when I am out, I will sort them all out properly.” he told us, “When I am free, I will go to Hong Kong, London and Germany to thank everyone in person. I will also go to Amnesty International Taiwan to help you with your work regarding the death penalty.”

Many of the letters received were in foreign languages. Although Chiou didn’t understand them, he could feel the sense of support from those letters. We told him we could teach him English once he is free so that he can read more letters. “I am too old for that now,” he answered. “I lost the prime of my youth in prison, but I will be very happy if you can translate them for me.”  Chiou was in his early 20s when he was detained in 1988. Having spent more than three decades in prison, he suffered from torture and almost died of illness.

“It would be better for me to tell you what happened in prison when I am out. You should encourage more young people to study law and be good judges and lawyers. Only then will we be able to carry out judicial reform together,” he said with a smile. We couldn’t help but wonder about these unspeakable experiences he chose to withhold from us.

“There are two songs that I would like to sing to you, in Taiwanese,” he said as a solemn hymn came through the phone receiver.

The songs speak of the freedom he longs for, they speak of sadness, loneliness, but also hope. They convey gratitude and speak of Jesus. He could not read music, but he wrote these two songs last year. He said that he came to know Jesus in prison and now reads the Bible every day.

This is the 31st year that Chiou has been living as a prisoner on death row. Redressing the unfairness that led to Chiou’s conviction remains a huge challenge, but he is determined to clear his name.

In a new report published last month, Amnesty International highlighted how in 2018 the world got closer than ever to ending its resort to the death penalty. Excluding the thousands of people that we believe continued to be executed in China, the total number of known executions dropped by over 30% and reached the lowest total we reported in at least a decade.

However, Taiwan is one of a handful of countries that bucked this positive trend. Taiwan carried out its first execution since 2016 on 31 August 2018, the first implementation of a death sentence authorized by the government of President Tsai Ing-wen. The execution was ordered less than 24 hours after a former death row prisoner was awarded over NT$17 million (US$550,000) by the High Court as compensation for the miscarriage of justice in his case. In October, the Supreme Court quashed the arson conviction and death sentence of another man and ordered a retrial – yet another reminder that as long as the death penalty remains in the law books, the risk of executing the innocent can never be eliminated.

There were 42 people with finalized death sentences on Taiwan’s death row at the end of 2018. We must act to support Chiou Ho-Shun in his quest for justice and consign the death penalty to the history books once and for all.