Bahrain: What lies behind the scenes of the Formula One Grand Prix

This weekend, the world will tune in- once again- to Bahrain’s International Circuit to watch one of the glitziest events on the sporting calendar: Bahrain Formula One Grand Prix. As you buckle up for this round of the top-level sport, we would like to steer your attention toward those 5 things happening away from the prestigious circuit:

Tweeting can be a crime

Social media posts critical of the government can land you in jail. Nabeel Rajab, the country’s prominent human rights defender, is serving a 5-year sentence for tweeting about the conflict in Yemen and torture allegations in Jaw prison. Similarly, Najah Yusuf is in prison for publishing tweets that included criticism of the F1 races.

Following yet another crackdown in 2016, most human rights defenders in Bahrain are now jailed, silenced or forced to move abroad. Sayed Ahmed al-Wadaei, a Bahraini human rights activist, sought refuge in the UK in 2012 after he was detained, tortured and sentenced to six months in a Bahraini prison by a military tribunal. Willing to stop at nothing, a year ago, the Bahraini authorities arbitrarily detained Sayed’s mother-in-law, brother-in-law and cousin in retaliation for his continued human rights work in exile.

The government continues to resort to revoking citizenships and therefore rendering hundreds stateless, as a penalty for “crimes against national security”. So far since 2011, more than 800 people have been stripped of their nationalities. Of those, 115 lost their citizenship following  a ludicrous mass trial that relied on confessions extracted under torture.

In a recent investigation, Amnesty revealed a shocking pattern of medical negligence in Bahrain’s Jaw Prison. In some instances, individuals with serious conditions like cancer, multiple sclerosis and sickle-cell anaemia have been denied specialist care and medication.

Last year, Bahraini authorities stepped up their brutal crackdown on opposition societies by passing a law that bans “active leaders and members of dissolved political associations” from running for office. As authorities dissolved the country’s main opposition groups, Waad and Al Wefaq, last year, leaders and members of those societies can no more stand in elections.

This is not all! Bahrain’s human rights record is not as shiny as the high-powered cars on the spectacular circuit. Read our latest Bahrain human rights review here for more information.

Here is what lies behind the scenes of the #Bahrain @F1 Grand Prix! #BahrainGP 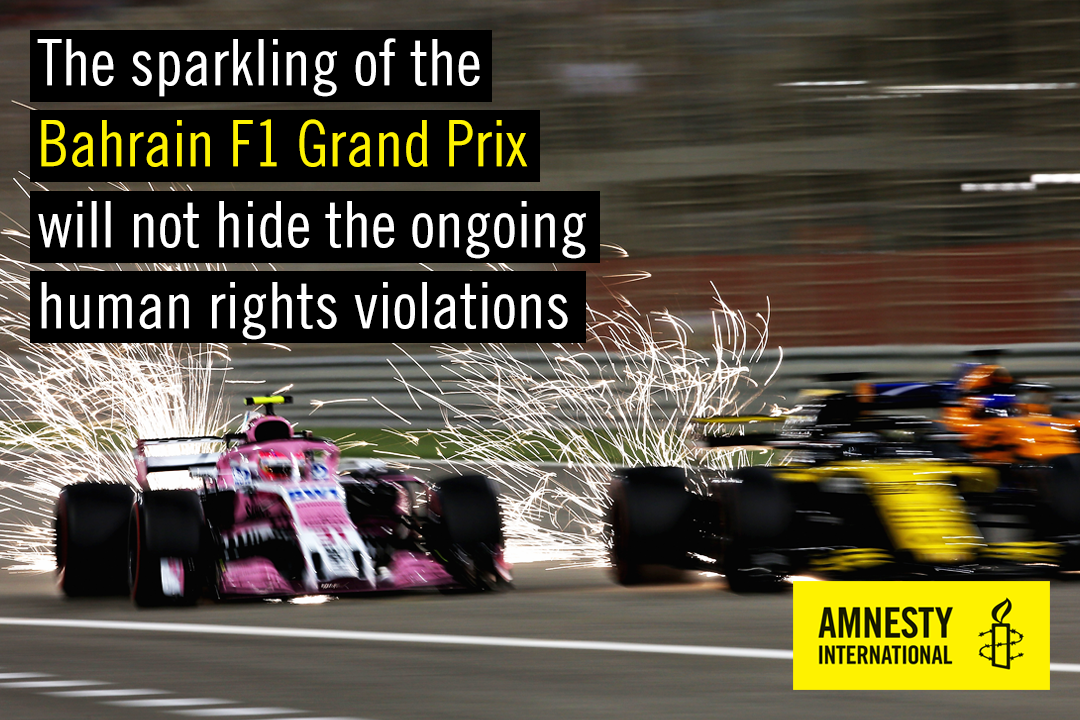