The conflict between Armenia and Azerbaijan over the Nagorno-Karabakh territory has caused decades of misery for older people, Amnesty International said in two new reports published today.

The conflict – first fought from 1988 to 1994, and then during another escalation in late 2020 – sawolder people unlawfully killed, tortured, and forcibly displaced; abuses which have marked their lives ever since.

One report, Last to Flee: Older People’s Experience of War Crimes and Displacement in the Nagorno-Karabakh Conflict, documents how older ethnic Armenians were disproportionately subjected to violence in the recent conflict, including war crimes such as extrajudicial executions, as well as torture and other ill-treatment while in Azerbaijani detention.

The other report, ‘Life in a Box’: Older People’s Experiences of Displacement and Prospects for Return in Azerbaijan, details the suffering experienced by older Azerbaijanis who were forced from their homes in Nagorno-Karabakh and seven surrounding districts during the first conflict.

“The conflict in Nagorno-Karabakh highlights the unique risks that older people face in armed conflicts. Often the last to flee, they also suffer the consequences of war for decades on end,” said Laura Mills, Researcher on Older People with Amnesty International’s Crisis Response team.

“In both Armenia and Azerbaijan, older people have struggled to rebuild their lives in displacement – yet their loss of independence and dignity is treated as inevitable or irrelevant.

“With tensions high – and further conflict still possible – both Armenian and Azerbaijani authorities should make clear and firm commitments to prioritize the protection of older people, and ensure their human rights, including rights to housing and health, are protected.” When active fighting broke out in Nagorno-Karabakh in September 2020, older people in ethnic Armenian communities were almost invariably last to flee their homes, and were disproportionately impacted by violence as a result.

During the early stages of the conflict, men aged between 18 and 55 were typically mobilized to fight or to serve the war effort as volunteers. By the time Azerbaijani forces advanced on ethnic Armenian villages and towns, the only people remaining were often older people, and particularly older men.

Many older people encountered obstacles while trying to leave. Physical disabilities and health problems made it difficult for some to flee. In other cases, some older people with psychosocial disabilities or dementia found it difficult to comprehend the necessity or urgency of leaving. Others chose not to leave because they had strong attachments to their homes, or were reluctant to abandon land or livestock.

Older people who fled their homes have languished in displacement in the years since. They reported a lack of access to adequate housing and a loss of livelihoods, which further entrenched feelings of helplessness and isolation. They also suffer due to an extreme lack of mental health or psychosocial support services. 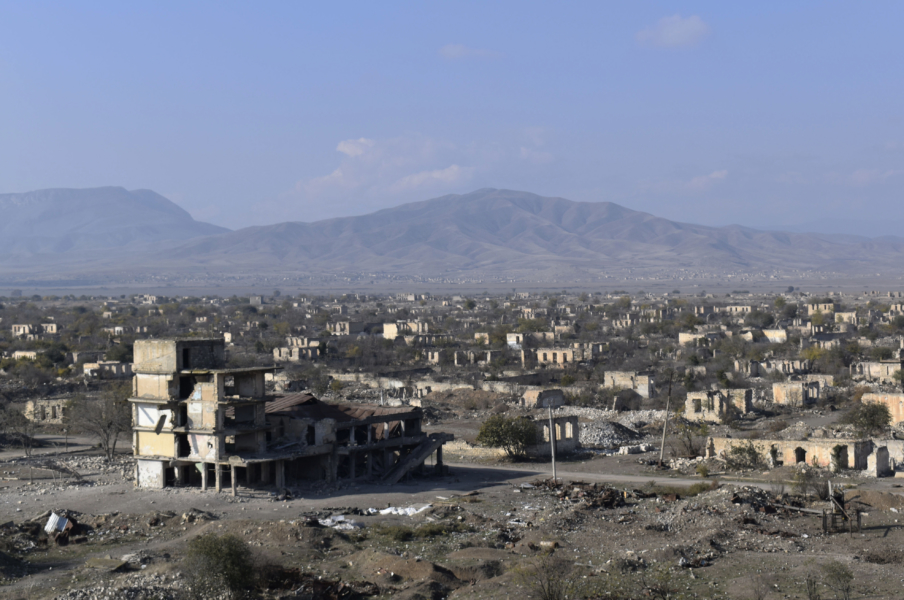 On the ethnic Armenian side, more than half of civilian deaths were among older people. Many interviewees told Amnesty International of extrajudicial executions by Azerbaijani forces. They described killings where victims were beheaded or shot at point-blank range, constituting the war crime of wilful killing. Some appeared to have been tortured prior to their deaths, and some corpses were mutilated afterwards.

Amnesty International was able to verify many of these cases through testimony from witnesses and relatives, as well as by reviewing and verifying death certificates, official forensic examinations undertaken by the Armenian authorities, and videos posted to social media.

Slavik Galstyan, 68, who lived with his family in the village of Mets Tagher and had a psychosocial disability, did not want to leave his home in October 2020. His body was found more than two months later. A death certificate issued by the Armenian authorities concluded that his death was caused by traumatic blood loss from gunshot wounds to his chest, stomach, and other internal organs.

His son, Ashot, identified the corpse at the morgue and said his father’s body appeared to have been mutilated. Ashot told Amnesty International: “His head was crushed. It was as if all the bones in his body had been broken. He was like a [slab of] meat.”

Sedrak Petrosyan, 90, was brutally kicked and beaten while in captivity, and his 56-year-old son went missing after being taken into Azerbaijani custody. He said: “I want to die. I wanted to die in prison but somehow I survived.”

Other interviewees reported beatings and other forms of physical violence – and in one case, a mock execution – and other ill-treatment. Older men appear to have been targeted because Azerbaijani soldiers believed they had participated in Armenia’s war effort during the 1990s.

While displacement can be devastating to all people, it poses particular challenges for older people

“The Azerbaijani government must ensure that any members of its armed forces responsible for the war crimes committed – including willful killings, torture or inhuman treatment, or enforced disappearances – are prosecuted in fair trials,” said Laura Mills. During the initial conflict over Nagorno-Karabakh from 1988 to 1994, more than half-a-million ethnic Azeri civilians from the region and seven surrounding districts were forcibly displaced. Many civilians, including older Azeri civilians, were unlawfully killed and subjected to other violence. Those who were displaced have lived in other parts of Azerbaijan ever since.

For decades, many lived in overcrowded tent camps, dormitories and schools, or abandoned railway cars, sheds, or buildings. They shared toilets and showers with dozens of people, and sometimes lived without electricity, heat, or running water. They struggled to meet their basic needs, or pay for food and medication.

In 2020, Azerbaijan reclaimed much of the territory lost in the initial conflict, and there are plans to resettle potentially hundreds of thousands of displaced persons. However, there are significant barriers to doing so: Armenian forces laid anti-personnel landmines on a massive scale, and also committed and oversaw the widespread destruction and seizure of property.

Many older people raised concerns about returning permanently to their home regions. Mehriban M*, 72, told Amnesty International: “I have huge security concerns when it comes to living close to Armenians. There is lots of trauma between our two nations. I know lots of people who were killed.”

Despite significant progress in recent years, it is estimated that as many as 100,000 displaced people still live in difficult conditions in informal housing in Azerbaijan. These residences are overcrowded and often difficult to physically access, meaning that older people are forced to rely on assistance from relatives or others simply to leave their homes.

Manzar A*, an 81-year-old displaced woman living in a dormitory, told Amnesty International: “This is like a prison, there is no air… I can’t go downstairs to buy food. I cannot go out. If I really need to, people have to help me.”

Amnesty International also spoke to older people who said that they had virtually no employment opportunities, or felt excluded from resettlement conversations.

Famil M*, 71, said: “Right now I’m just waiting around… Seventy is nothing, I don’t feel old and I’m perfectly fit. But every company tells me I’m too old.”

Malik C*, 67, said: “I feel that my opinion is not heard because I don’t participate anywhere now. As a pensioner I spend most of my days in the garden. Nobody knows [my home village] better than me, but strategy is formed by people from Baku.”

Amnesty International is calling on the Azerbaijani government to ensure any process of return fully respects the rights and needs of a diverse range of older people, including older women, older people with disabilities, and that all older people are meaningfully included in decisions related to returns and provided information transparently and accessibly, so that they can make informed, voluntary decisions.

“All displaced persons have the right to return to their original homes in conditions of dignity and security, and the unique risks to older people must be taken into consideration. The Azerbaijani authorities must ensure they have access to appropriate housing and can earn a living on an equal basis with others,” said Laura Mills.

“The Armenian forces’ destruction of civilian objects and seizure of civilian property, as well as their widespread use of landmines, violate international humanitarian law. Not only do these violations continue to undermine the right to return of displaced people, they pose a serious obstacle for Azerbaijan’s efforts to resettle displaced populations in conflict-affected regions.”

For the report, Last to Flee: Older People’s Experience of War Crimes and Displacement in the Nagorno-Karabakh Conflict, Amnesty International interviewed 69 people, including 42 older people (22 older women and 20 older men, aged between 60 and 90 years old). The organization sought a diverse group of interviewees to represent a wide age range, a mix of genders, and numerous disabilities.

For the report, ‘Life in a Box’: Older People’s Experiences of Displacement and Prospects for Return in Azerbaijan, Amnesty International interviewed 40 displaced older people, including 23 older men and 17 older women aged between 58 and 88.

Under international law, there is no specific definition of older age. While chronological age is often used as a benchmark, this does not always reflect whether a person is exposed to risks commonly associated with older age. Amnesty International prefers a context-specific approach to older age, as supported by the UN Office of the High Commissioner for Human Rights.

Amnesty International does not take a position on the dispute over the territory of Nagorno-Karabakh,but emphasises that return to original homes in conditions of dignity and security is the right of all displaced people.

States should curb urban slaughter of civilians from explosive weapons

States should curb urban slaughter of civilians from explosive weapons

Azerbaijan: Stop the vicious campaign of gendered smears and reprisals against women activists

Azerbaijan: Stop the vicious campaign of gendered smears and reprisals against women activists