The US government must carry out impartial, thorough investigations into credible evidence its rapidly escalating air strikes in Somalia have killed numerous civilians, Amnesty International said in a new report today.

The Hidden US War in Somalia details how 14 civilians were killed and eight more injured in just five of the more than 100 strikes in the past two years. These five incidents were carried out with Reaper drones and manned aircraft in Lower Shabelle, a region largely under Al-Shabaab control outside the Somali capital Mogadishu. The attacks appear to have violated international humanitarian law, and some may amount to war crimes.

When approached with Amnesty International’s findings, the US Africa Command (AFRICOM) repeated its denial that any civilians have been killed in its operations in Somalia.

“The civilian death toll we’ve uncovered in just a handful of strikes suggests the shroud of secrecy surrounding the US role in Somalia’s war is actually a smokescreen for impunity,” said Brian Castner, Amnesty International’s Senior Crisis Advisor on Arms and Military Operations.

The civilian death toll we’ve uncovered in just a handful of strikes suggests the shroud of secrecy surrounding the US role in Somalia’s war is actually a smokescreen for impunity.

“Our findings directly contradict the US military’s mantra of zero civilian casualties in Somalia. That claim seems all the more fanciful when you consider the USA has tripled its air strikes across the country since 2016, outstripping their strikes in Libya and Yemen combined.”

In the course of their investigation Amnesty International researchers travelled to Somalia, conducted more than 150 interviews with eyewitnesses, relatives, persons displaced by the fighting, and expert sources – including in the US military – and rigorously analysed corroborating evidence, including satellite imagery, munition fragments, and photos from the aftermath of air strikes.

The number of US strikes in Somalia surged after 30 March 2017, when President Trump signed an Executive Order declaring southern Somalia an “area of active hostilities”.

According to a retired US Brigadier General Amnesty International spoke to, this lessened the burden on the US military to guarantee that civilians will not be killed in air strikes. Worryingly, the General also believes that the Executive Order widened the net of potential targets to include virtually any adult male living in villages sympathetic to Al-Shabaab and seen in proximity to known fighters. Such a broad targeting mandate would violate international humanitarian law and lead to unlawful killing of civilians.

For example, in a strike on the hamlet of Farah Waeys, AFRICOM claims that “all individuals injured or killed were members or affiliates of Al-Shabaab,” while Amnesty International has documented that two civilian men were killed, and five women and children injured, in addition to Al-Shabaab casualties. 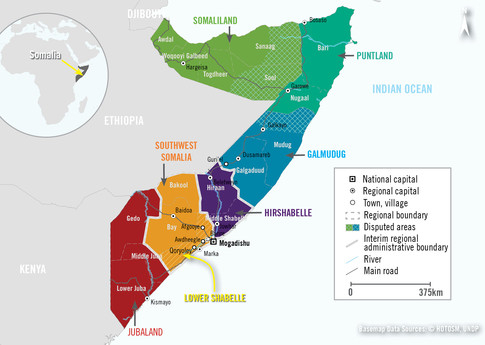 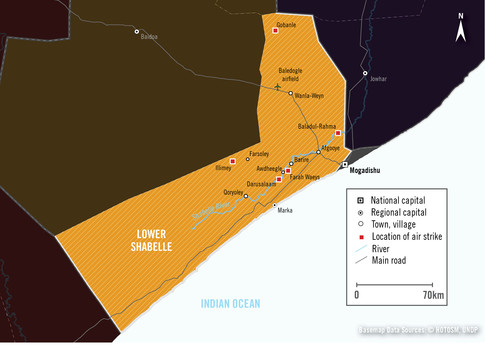 Amnesty International uncovered compelling evidence that US air strikes killed a total of 14 civilians and injured eight more, in five attacks that may have violated international humanitarian law and could, in some cases, constitute war crimes. Reports of more civilian casualties from other strikes could not be sufficiently corroborated for inclusion in the report.

In one case, a US military air strike in farmland near the village of Darusalaam killed three local farmers in the early morning hours of 12 November 2017. They were resting in the open after working well into the night digging irrigation canals.

At around 3am an air strike targeted them without warning. The blast sent other farmers scrambling for cover and woke residents of two nearby villages. Villagers who went to recover the bodies at first light described the men’s horrific injuries.

Amnesty International later analysed photographic evidence of the bodies that is consistent with eyewitness testimony. Two of the men were badly disfigured. A large ordnance fragment entered the first man’s forehead, collapsing his skull; his forearms were blown backward and nearly torn off, but for a thin flap of skin. The second man’s face, throat and chest were pockmarked by multiple ordnance fragments. The third man had a large wound on his side, and a small blow to his head, just above the right eye.

A farmer from Darusalaam village told Amnesty International: “The noise of the plane was louder than before, the day the attack happened. The weeks before, it used to come and leave, only that night it was not leaving. It was coming and coming and coming. When the noise [of an air strike] happened, everything ceased…I was so frightened. I couldn’t keep watch on the farm at all. I went under the shelter of the tree and hid… These three young men were not expecting to be killed by a plane, and we did not expect the world to be silent.”

“The noise of the plane was louder than before, the day the attack happened. ... When the [air strike] happened, everything ceased…I was so frightened. I couldn’t keep watch on the farm at all. I went under the shelter of the tree and hid… These three young men were not expecting to be killed by a plane, and we did not expect the world to be silent.

As in the other cases Amnesty International investigated, multiple local residents identified the victims as civilians and not Al-Shabaab fighters.

Photos of the three dead farmers and the surrounding area allowed Amnesty International’s Digital Verification Corps to pin down the location of the air strike.

They also provide other important clues, such as fractured dirt and a one-metre crater produced by high explosives, as well as ordnance fragments that indisputably come from a GBU-69/B Small Glide Munition. This type of weapon can only be launched from the US Air Force’s AC-130 aircraft, a gunship most often used in close air support of infantry, not in isolated air strikes. Not seen in Somalia in over a decade, the aircraft’s presence marks an escalation of the conflict. AFRICOM has not reported the employment of AC-130s, but it did confirm that it carried out an air strike in the Lower Shabelle region at approximately 3am on 12 November 2017, claiming that it had killed “several” militants.

In another case, five civilians, including two children, were killed when a suspected Al-Shabaab truck exploded as it passed through the hamlet of Illimey on 6 December 2017. Satellite imagery shows that up to 10 structures were partially destroyed in the blast and resulting fires. 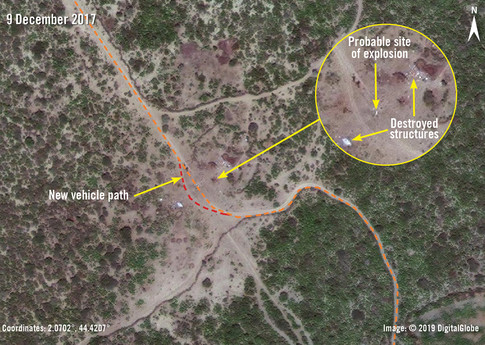 A friend of one of those killed heard the blast from Farsoley, a village 14km away: “It was huge…within about five minutes, I could see a huge dark smoke going up. We all said something really terrible happened…I rushed to the scene…[the truck] was completely destroyed. The whole village was burned. All the trees nearby were also burned. There was a big hole where the [truck] was hit.”

While AFRICOM categorically denies having launched the attack on Illimey, there is compelling evidence that an air strike was involved, and a US security agency may be responsible.

Media reports and multiple eyewitnesses said that the explosion occurred when a munition was fired at the vehicle from the air. Eyewitnesses recall seeing or hearing an aircraft either before or after the attack, and Amnesty International reviewed satellite imagery that is consistent with an air strike being the cause of the explosion.

US forces are known to have carried out a further 76 air strikes in Somalia during the period Amnesty International examined, as well as 24 in the first two months of 2019, so the civilian death toll may well be much higher.

For Somalis affected by US air strikes, there has been little, if any, chance of obtaining justice. It is near impossible to even report the killing or injury of family or community members, given the location of these attacks and the security risks associated with doing so.

The US government must ensure investigations into all credible allegations of civilian casualties are carried out, with accountability for those responsible for violations and reparation made to the victims and survivors.

“The US government must ensure investigations into all credible allegations of civilian casualties are carried out, with accountability for those responsible for violations and reparation made to the victims and survivors,” said Ella Knight, Military, Security and Police Researcher at Amnesty International.

“Both the US and Somali governments need to put an end the lack of transparency and must do more to enable affected communities to self-report civilian casualties – without this, justice is likely to remain elusive.”