This is the full prepared transcript of Kumi Naidoo's testimony to the Philippines Commission on Human Rights's investigation into 47 'carbon major' companies, and their responsibility for human rights abuses resulting from climate change. A video of the testimony is available here.

These fossil fuel companies have known for a long time that carbon emissions lead to climate change and that this, in turn, results in major harms to people and the planet.

As the new Secretary General of Amnesty International and former Executive Director of Greenpeace International, it is very meaningful for me to be speaking here today. The truth is, although we artificially separate environment and human rights into different sectors, that is not the way these issues are experienced in people’s lives.

The petitioners are people refusing to be seen as helpless silent victims. They are an example to communities around the world and for all those who feel powerless in the face of climate change. 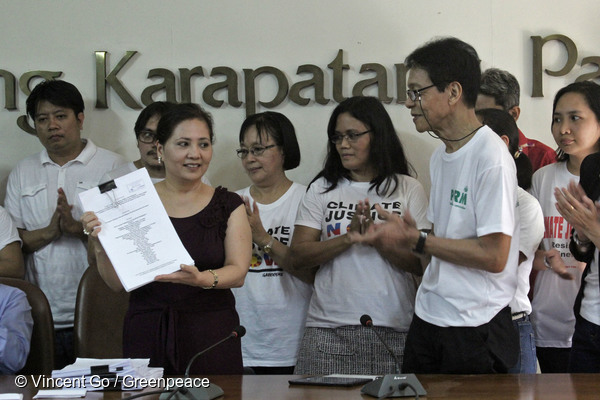 The petitioners’ testimonies that this Commission has heard vividly explain the link between climate change and human rights better than any report, recommendation or resolution.

Ten years ago, the debate at international level was still focused on demonstrating how climate change was a human rights issue. Now, we have passed that stage. The link between climate change and human rights has been established by reports of several UN agencies and offices, several UN Special Rapporteurs, and recognized in eight resolutions of the Human Rights Council. Several UN Treaty Bodies have also expressed concerns on the human rights impacts of climate change in their concluding observations to a number of countries, including to the Philippines, and they have started to address the issue in their General Comments.

Just recently, the Human Rights Committee adopted a new General Comment on the Right to Life which recognized that climate change, along with environmental degradation and unsustainable development, “constitute some of the most pressing and serious threats to the ability of present and future generations to enjoy the right to life”. Earlier this year, the Committee on the Elimination of Discrimination against Women (CEDAW) published a General Recommendation entirely dedicated to examining the gender-related aspects of disaster risk reduction in the context of climate change. At regional level, also this year, the Inter-American Court on Human Rights has acknowledged in an advisory opinion that the negative impacts of climate change affect the effective enjoyment of human rights.

The truth is, there is no question anymore about whether climate change is a human rights issue or not. The petitioners’ testimonies that this Commission has heard vividly explain the link between climate change and human rights better than any report, recommendation or resolution. They talk about lives being stolen, livelihoods being lost, houses being destroyed, children being deprived of the protection of their parents or transgender women being discriminated in the post-disaster relief distribution. There is no doubt that all these testimonies of human impacts are stories of human rights harms.

The brave Filipino men and women who have given their testimony before this Commission are unfortunately not the only one who have experienced the worst face of climate change. Within the last weeks alone, I have personally witnessed how families in Puerto Rico were left living under tarpaulins for over a year after hurricane Maria, to name only one example.

Climate change is a human rights issue not only because its devastating impacts affect the enjoyment of human rights, but also because it is a man-made phenomenon which can be mitigated.

However, what is clear from both the stories of the petitioners and the dozens of accounts that I have listened to in other parts of the world, is that there are plenty of people out there not only willing to tell the stories of their suffering, but also eager to achieve justice for what has happened to them and on behalf of all the others who could not be heard. They rightfully see themselves as rights-holders and demand accountability to those with key obligations and responsibilities. 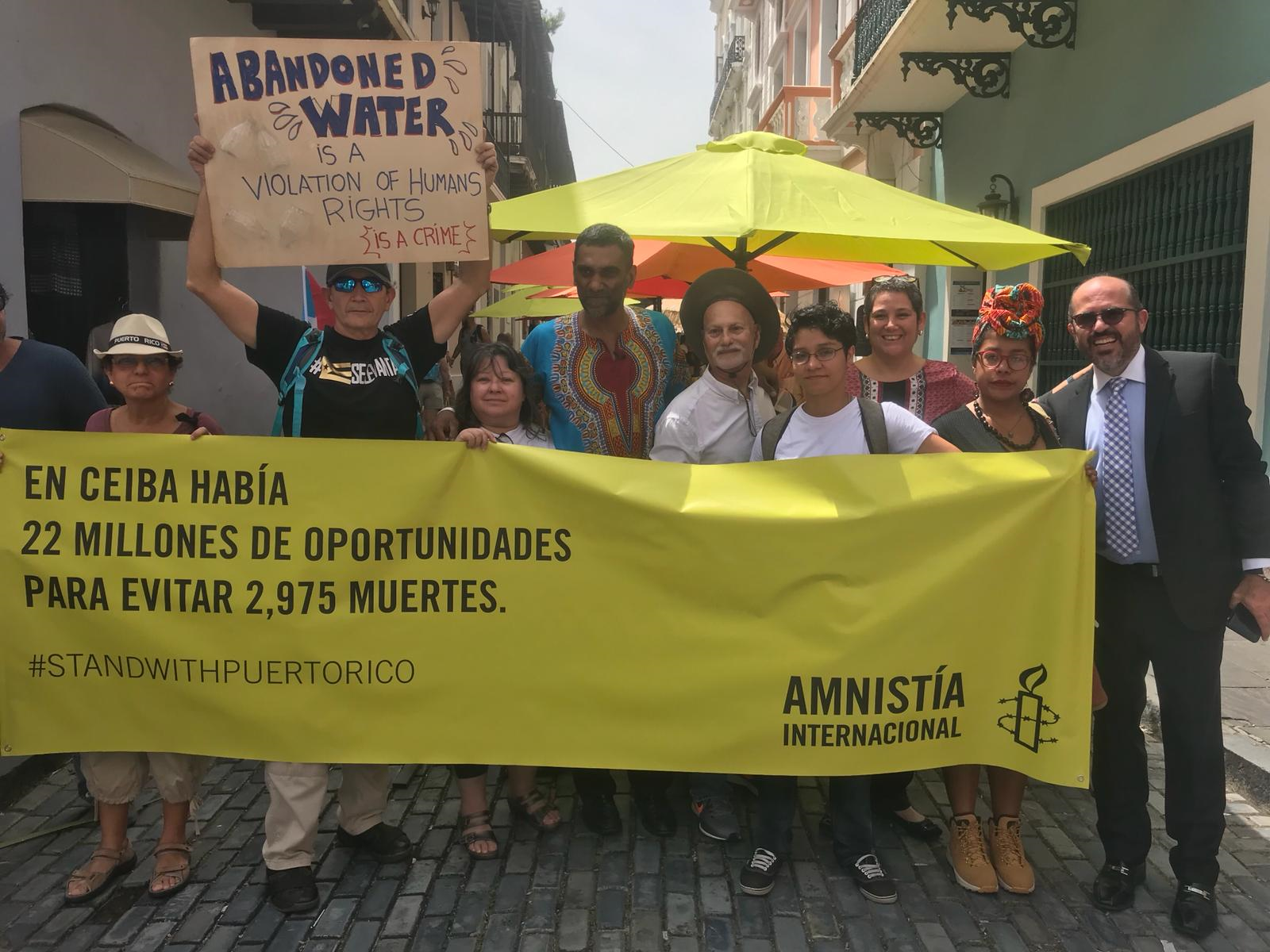 Kumi Naidoo meets with human rights activists in Puerto Rico in September 2018, one year on from Hurricane Maria

There is evidence pointing at the fact that fossil fuel companies have not only failed to minimise greenhouse gas emissions resulting from their activities and products...but in many cases have been involved in activities aimed at casting doubts about the connection between fossil fuels and climate change

Climate change is a human rights issue not only because its devastating impacts affect the enjoyment of human rights, but also because it is a man-made phenomenon which can be mitigated. The solutions to climate change have been known for decades now. If people in the Philippines and all around the world continue to experience unbearable losses because of climate change, it is because those with the obligation and responsibility to act have done nothing or far too little.

Businesses have a responsibility to respect human rights as clearly outlined by the United Nations Guiding Principles on Business and Human Rights (UNGPs). To meet this responsibility, companies must assess the potential impact of their activities on human rights, and put in place measures to prevent negative impacts. They must make such findings and any prevention measures public. The UNGPs also require businesses to take measures to remedy human rights abuses they cause or to which they contribute, either by themselves or in cooperation with other actors. Such responsibilities extend to human rights harms resulting from climate change.

In particular, corporations should implement due diligence processes to assess the climate change-related human rights impacts of their products and activities and put measures in place to minimise greenhouse emissions, including in their activities abroad, and make relevant information about their emissions and mitigation efforts public. These efforts must extend to all their major subsidiaries and affiliates and, as far as reasonably practicable, entities in their supply chain.

The evidence brought before this Commission shows that the respondents have failed to comply with their responsibility to respect human rights.

The 47 respondents are “carbon majors”. This means that they are responsible, through their products and operations, for a significant part of the carbon emissions produced in post-industrial times and therefore have contributed to climate change.

These fossil fuel companies have known for a long time that carbon emissions lead to climate change and that this, in turn, results in major harms to people and the planet.

There is evidence pointing at the fact that fossil fuel companies have not only failed to minimise greenhouse gas emissions resulting from their activities and products, despite their capacity to do so, but in many cases have been involved in activities aimed at casting doubts about the connection between fossil fuels and climate change.

By failing to take measures to minimise greenhouse gas emissions resulting from their activities and products, fossil fuel companies are contributing significantly to the human rights abuses that result from climate change. 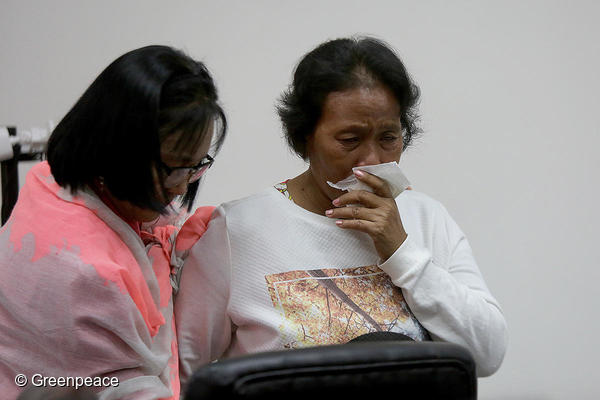 Amalia Bahian, a witness from Iligan City weeps after sharing her story during the climate change and human rights public hearing at the Commission and Human Rights (CHR) office in Quezon City, December 2018.

The role of the Philippines Human Rights Commission

Carbon majors cannot continue to put their economic interests before the public interest of human survival and respect for human rights.

The Special Report on Global Warming of 1.5°C of the Intergovernmental Panel on Climate Change (IPCC) has confirmed that not exceeding a global warming of 1.5°C is an absolute imperative to protect human rights in the coming years. It has also sent a new, compelling wake-up call, as it has shown that we only have 12 years to halve carbon emissions in order to aim for the 1.5°C target.

Continuing to rely on fossil fuel extraction and production will bring humanity to the brink of collapse. It is a selfish, short-sighted and suicidal approach. Carbon majors cannot continue to put their economic interests before the public interest of human survival and respect for human rights.

In the face of this urgency, the Commission cannot afford any hesitation. It already gave an incredible proof of responsibility by recognizing its duty to inquire into the matter. It has now the potential and the capacity to recognize the legal responsibility of carbon majors for the human rights harms that the people in the Philippines have suffered or might be exposed to in the future.

This Commission can therefore become an inspiration for all human rights bodies and organizations, including other national human rights institutions, especially for those that have remained unengaged in the face of human rights violations resulting from climate change.

In this moment, we need everybody to live up to their responsibilities to act on climate change and protect human rights. This Commission has now the opportunity to play its part. By positively responding to the petitioners’ first prayer and recognizing the legal responsibility of the respondent carbon majors for human rights abuses resulting from climate change, the Commission would take an historical step in meaningfully ensuring the right to remedy to all those who have suffered as the result of the actions of these companies, but also in ensuring that a different future is written for the people in the Philippines and for humanity as a whole.

Poland: Third-party intervention to the European Court of Human Rights in the case of Igor Tuleya