Women with Disabilities: Invisible Survivors of Domestic Violence in Kyrgyzstan

In February 2021 Gulzat[1], a 26-year old woman with cerebral palsy managed to escape the abusive home environment she had lived in since she was a child.  This was one of the rare occasions when a case of domestic abuse against women with disabilities reached the national media.

In Kyrgyzstan, there is a lot of stigma around domestic violence, and disability. This is a highly traditional society with long-standing social norms where “shame” stops women from talking about abuse in the family. Moreover, women with disabilities are highly reliant on the help of their family. This dependency means they simply cannot report their abusive family members to the authorities. And even if they did, the legislative provisions for reporting domestic violence do not provide satisfactory protection or a pathway to justice. The Committee on the Elimination of Discrimination Against Women (CEDAW) in its 2015 report on Kyrgyzstan noted “the persistence of deep-rooted patriarchal attitudes and stereotypes concerning the roles and responsibilities of women and men in the family and society, which discriminate against women and perpetuate their subordination within the family and society”.[2]

Gulzat grew up with her father, an alcoholic, who frequently and severely beat his wife. After the death of her parents Gulzat and her brother were taken to their grandparent’s house in a remote village in the mountains where she lived until she was 26 years old. There Gulzat was constantly subjected to physical abuse, and from the age of 16, sexual violence carried out by her grandfather and uncle. Her life was spent in isolation. Now, at 26, Gulzat cannot read or write and does not have sufficient life skills to live independently. It was her brother who managed to escape the family and who brought this awful story to the attention of the authorities with support from a local non-governmental organisation (NGO) “Ravenstvo” (Equality) - The Union of Disabled People in Kyrgyzstan. “Ravenstvo” helped Gulzat to move to the capital, Bishkek, where she now lives in a domestic violence shelter. [3]

In a recent report, the Ministry of Interior stated that in 2019 around 6650 women in Kyrgyzstan reported domestic violence.[4] Eighty-six percent of those cases were withdrawn by women before they reached the courts, mostly because of pressure from relatives. The perpetrators received criminal sentences in only around 200 cases. 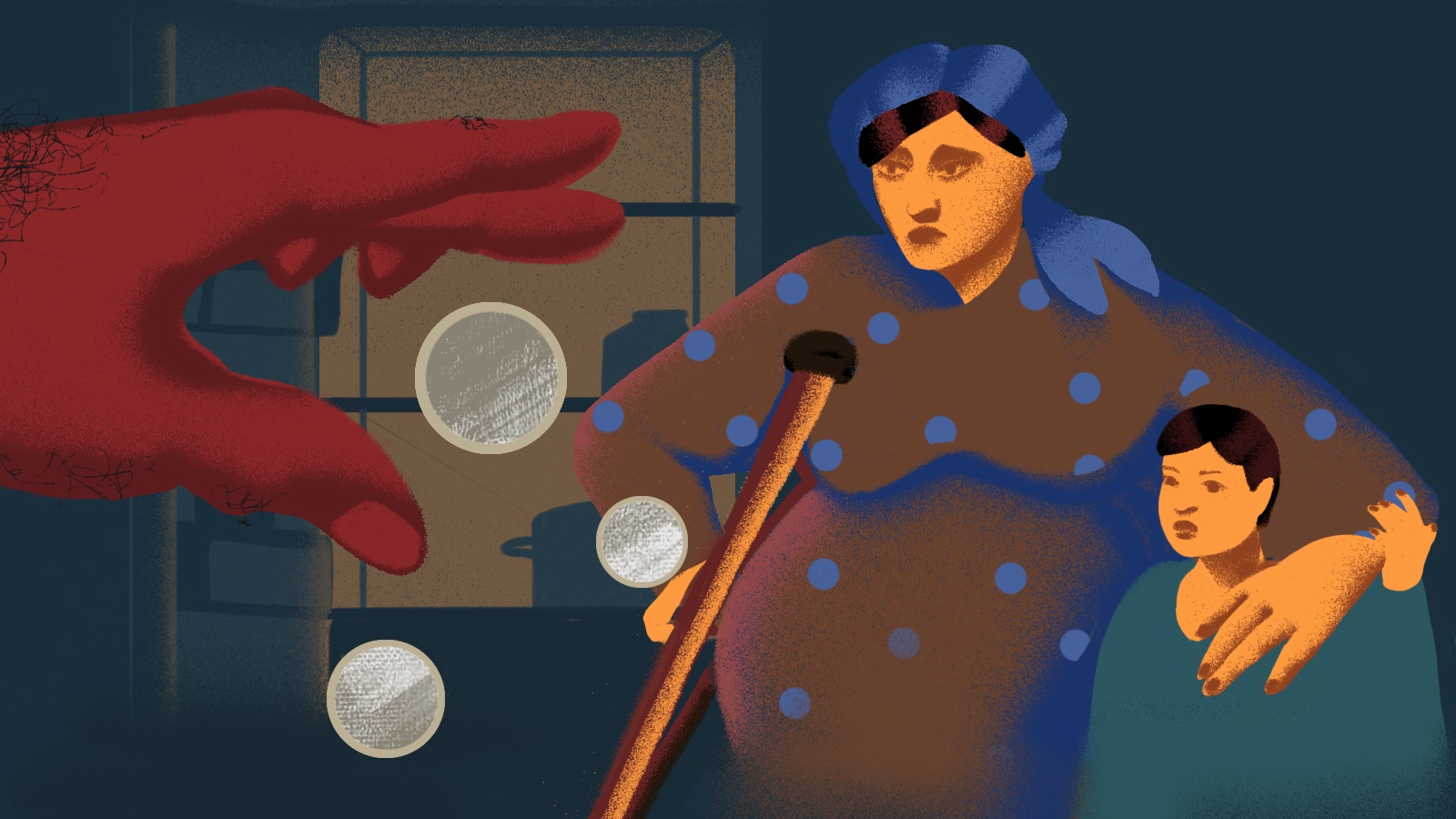 According to the official statistics for 2019 most of the cases of domestic violence registered by the authorities came through Crisis Centres. Crisis Centres provide counselling, psychological, legal and medical assistance for women with children who suffer from domestic violence. Out of 6,650 registered cases overall, around 6,020 women went to a Crisis Centre. Yet there are only 14 permanent Crisis Centres, and one Centre for Help and Rehabilitation in a country of 6.5 million people.  All of them, except one, are based in the towns of Bishkek and Osh. There are only two permanent shelters to provide a safe place for women and children who suffered domestic violence: one in Bishkek (for 12 beds), and one in Osh (its capacity also limited to 12 people, typically 3 to 4 women with their children)[5], and none of the shelters are supported by the government.[6] Civil society organisations running shelters and other care networks are the only hope for survivors of domestic violence to find support in most cases. Any NGOs, including those working for people with a disability, have to seek help through private donations and international financial grants as the government do not provide any regular funding.

The survivors of domestic violence can call the police followed by a formal written complaint. They can go to a hospital and then their doctor must report the criminal trauma. There are two hotlines women can use: 102 - to call the police. 117 – a new hotline added recently dedicated solely to cases of domestic violence. There is another option: women can report to a Crisis Centre for women and children. [8]

"If everybody does their job - courts, police, medical workers, even local women’s councils – we would have fewer cases of domestic violence in Kyrgyzstan. Everybody knows when a woman is beaten by her husband or relatives, but nobody will say a word. What the neighbours might think is more important than a woman’s health. Police actively discourage women from complaining about their husbands. The state appoints a male lawyer and courts humiliate women during the legal process. Medical experts demand money for primary examinations. A survivor of domestic violence faces barriers at every step to judicial justice."

Unfortunately, most of the government provisions and NGO initiatives, however poor, are not accessible to women with disabilities. Because of poverty, women with disabilities often do not have access to the internet. Women who have physical difficulties getting out of their homes will not go to a police station, a hospital, or a Crisis Centre. In most cases, women do not know the hotline numbers because they do not visit local services where they get information about how to seek help. Unless NGOs work directly with and engage, women with disabilities in their activities, the survivors of domestic violence do not know how to report abuse. 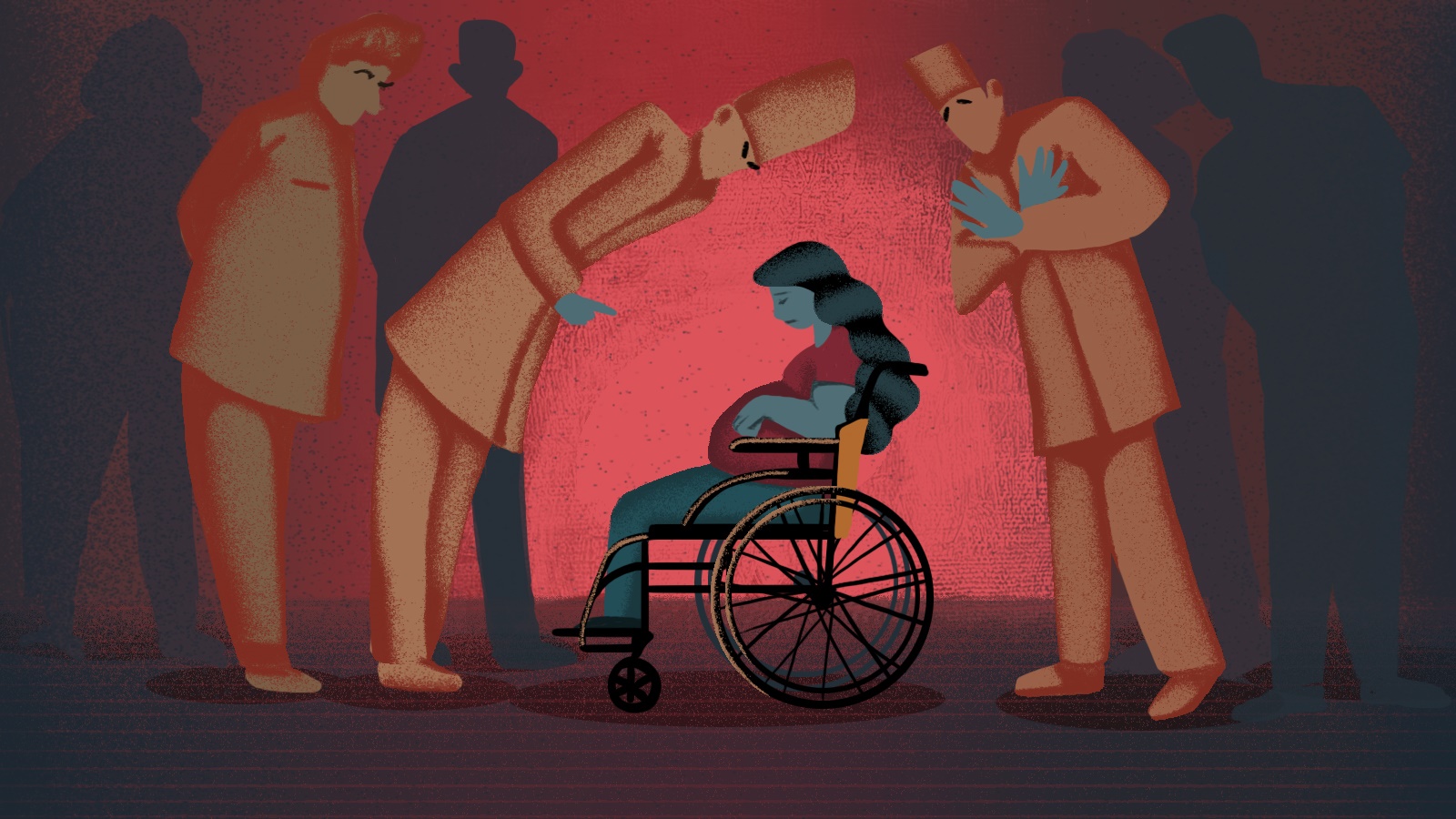 Very often it’s relatives who decide what women should do: how to dress, what to eat, whether to go out or not. Quite often relatives decide not to send girls to school because of their disability.

"Women with disabilities are deprived of education and understanding of their rights, they face poverty and ultimately are highly dependent on their family to meet their needs. As a result women simply do not know they can complain to the authorities, and even if they do, they do not know how." [9]

Kyrgyzstan has made good legislative steps toward combating domestic violence. It has a progressive Law on Domestic Violence; in 2019 it ratified the UN Convention on the Rights of Persons with Disabilities (CRPD). Plans for the implementation of the CRPD have been adopted, but the roll-out is slow and unambitious.

Despite this, there are significant barriers to implementation of the CRPD and the Law on Domestic Violence, including lack of shelters, police inaction, cultural stigma, poor state capacity and now, the Covid-19 pandemic. There are also very worrying political developments that threaten to undermine Kyrgyzstan’s commitment to its international human rights obligations. For instance, the new repressive law on NGOs adopted by the Parliament this year introduces bureaucratic requirements to already overstretched civil society organisations. The new Constitution introduced by the new government in 2021 puts an emphasis on “traditional values” and could reverse the positive achievements by not bringing legislation in line with international obligations.

Legislation in Kyrgyzstan lacks the acknowledgement that women with disabilities are subjected to double discrimination, as well as the concept of direct and indirect discrimination based on disability and gender.

"There is a need for a responsible body (or committee) to monitor the process of inclusion of the principle of non-discrimination in all laws, policies and strategies that constitute the legislative system of Kyrgyzstan and to implement anti-discrimination policies towards women with disabilities. Every woman in Kyrgyzstan must be protected by the state." [10]

[1] The name is changed for the purpose of anonymity. Interview with NGO “Ravenstvo”, April 2021

[8] A Crisis Centre for women with children who suffered from domestic violence provide counselling, psychological, legal and medical assistance.