#AgainstHATE Challenge by the Youth of South Korea

Hatred is something that plagues society and Korea is no exception. Koreans have a long-standing belief in the concept of being “ethnically homogeneous”, which clearly no longer holds true as Korea has increasingly transformed into a multicultural society, in part due to transnational marriages and arrival of immigrants.

Nonetheless, the concept of “ethnic homogeneity” remains a deep-seated stereotype in Korea and has, at times, fueled racial discrimination. There are countless migrant workers in agriculture, fisheries, and livestock industries. Additionally, manufacturing and primary industries rely heavily on immigrant labor. However, foreigners such as migrant workers and immigrants by marriage often face unfair treatment, hate, and discrimination.

Furthermore, the gender pay gap in Korea is one of the highest among OECD (Organisation for Economic Co-operation and Development) countries. Women still face misogyny and just a few years ago a woman was brutally killed in the middle of Seoul’s busy Gangnam neighborhood in an act of femicide.

In April, a strong runner in the Seoul mayoral election sparked controversy by declaring that people “have the right to not see a queer parade downtown”. A national assembly member from the progressive party shot back that “that is not a ‘right’, but rather the power the mass has to overlook the minority”. However, this comment didn’t gain as much media exposure as the hateful remark it was made in response to. As such, LGBTIQ groups in Korea often face vicious hate, which led to the heartbreaking suicide of three prominent transgender figures in early 2021.

Korea as a whole struggles with this culture of hate. That is why the Human Rights Education Team at Amnesty International Korea decided to focus on youth. The youth population is exposed to and afflicted by widespread hate speech both online and offline. Many struggle with how to respond to hate and some have taken action.

Campaigns and movements that call for anti-discrimination laws that can provide legal grounds for essential mechanisms to guard against hate speech are ongoing. We worked with youth in particular, to help rise up against hate and form an alternative narrative. For example, the #AgainstHate Challenge taps into the power of media in modern society. 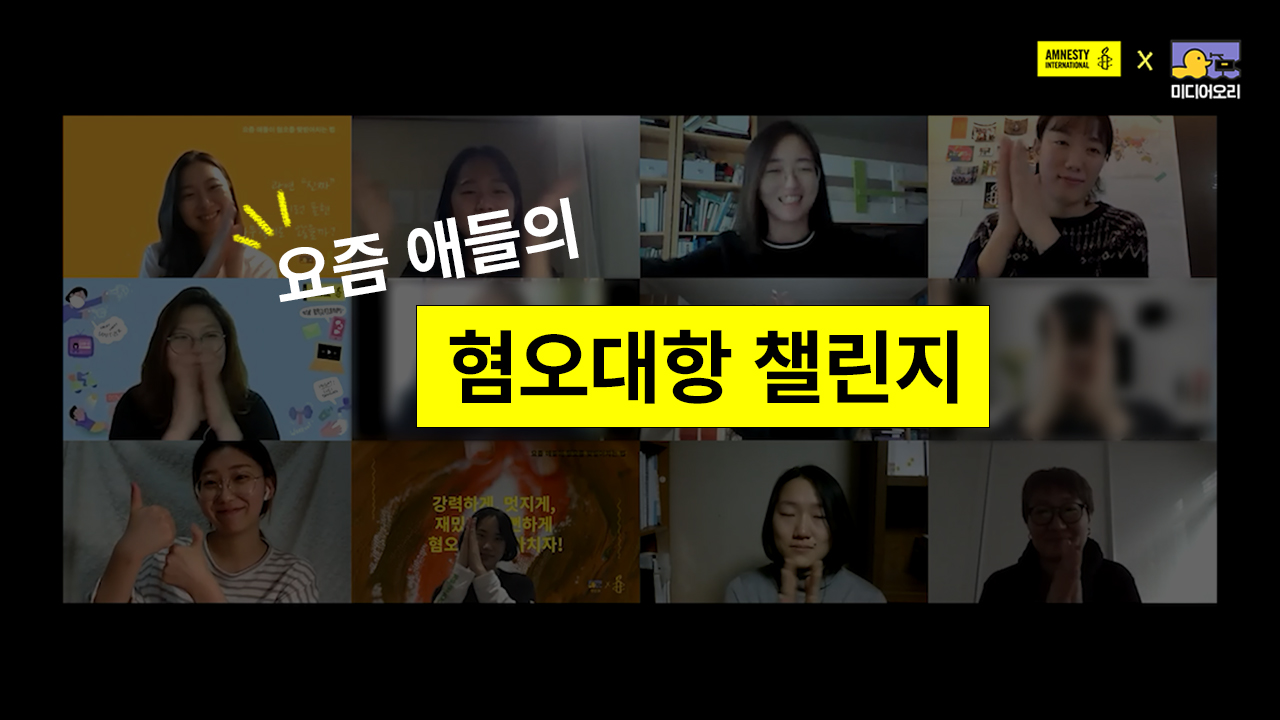 Young people of South Korea interested in countering hate speech came to human rights education workshops hosted by Amnesty International South Korea from September through November 2020. With the help of media incubator Media Ori, these workshops were held to raise awareness about hate speech, resonate with the pain, and empower youths in responding to hate speech.

Originally, the ‘Human Rights X Media’ workshop was to be held offline but was moved online due to the mid-August surge of the pandemic in Korea. We were apprehensive about this change because the workshop was designed not just to teach participants about film making, but also to share stories about being on the receiving end of hate and discuss potential solutions. Although we weren’t able to meet face-to-face, the messages and stories shared were deeply touching. We will never forget the tears and emotions that reverberated through the gallery screen with participants on the last day of the program.

A great advantage of education through media is that the sessions can be edited and compiled into a short documentary. Films produced by the participants can be posted and shared through social media so that people who weren’t able to join the workshop are still able to learn about the program. This also sends a message that there are people, and in particular youth groups, fighting against the culture of hate.

I want to make a video or movie that addresses the question ‘why?’. Today’s youths are more aware of equality than any other generation. That’s why I believe youth can help enhance human rights and promote anti-hate campaigns at a faster pace. – Yeseul (participant)

“I want to make a video that gives a voice to the unheard in society and helps put a face to the issue. I want my video to reveal the perceptions that have been rejected, if not directly, at least conventionally. Sometimes it’s frustrating when videos like this fail to reach those who perpetuate hate and are watched by people who already realize that hate is a problem. I hope that these well-developed messages reach those who really need to open their eyes to this problem.” – Bangman (participant)

“I always thought labeling people is dangerous, so I want to make a video about this. I’ve been called a ‘party pooper’ a lot especially by close friends. The problem is that it hurts the feelings of the person being labeled but the bigger problem is that this label effectively shuts you down.” – Jeonghyo (participant)

“Youth in our generation are digital natives. We’re instantly up to date on incidents that occur around the world and call for change in various different ways. We’re not celebrities, nor do we have a strong follower base, but if we can diminish hate speech by acting, I believe that we’re doing something meaningful.” – Jinhee (participant)

“Since we were all Amnesty supporters, everyone was extremely knowledgeable about human rights. I hope that future Amnesty programs like this are promoted to a wider audience so that more youth can have an opportunity to learn.” – Yooin (participant)

Youth participants produced videos conveying their thoughts. The videos clearly showed participants’ determination that they would “no longer tolerate hate speech, nor force a laugh”. The videos were divided into themes and have been posted on Amnesty International Korea’s social media account. The first theme is about addressing and responding to hate in day-to-day life. The second theme was solutions that can eradicate hate. And the third theme was the importance of maintaining alternative narratives to hold onto hope in the face of hurt and pain caused by hate. Amnesty International Korea will continue working with youths on various fronts in response to hate and discrimination.

Watch this short documentary #AgainstHATE Challenge by The Youth of South Korea created by youth activists/creators who put their heads together on their journey to inspire each other to find ways of fighting against hate.