What do Marielle and my mum have in common?

They’re brave women taking a stand for change. And brave women are the bedrock of our latest campaign, focusing on the women who are making the world a fairer place for us all.

Recently, we asked our followers on Twitter and Instagram to tell us about a courageous woman in their lives. Their responses were as varied and effusive as you’d expect. From their mums to Marielle Franco to global superstar Beyoncé, stories of courageous queens just kept coming.

Perhaps unsurprisingly, mothers topped the list. “My mum dared to utter against gender discrimination in her tradition based family” posted one Instagram user. “My stay at home mom went to college while raising a 7 year old after my dad died,” wrote another.

Over on Twitter, the trend was the same. One person tweeted: “My awesome mother who survived civil war, army coupe and take over, cattle rustling by running to the bush every single day with 5 of her children. Its the reason i am alive and she is the bravest woman i know.” Another simply wrote: “My mom for her sacrifices.”

One of the many stories that caught our eye came to us by email from Matt Cannock, who told us about his mother, Nichola, a former senior engineer in the UK’s Royal Air Force. “In 1993 she sued the MoD [Ministry of Defence] for discrimination,” wrote Matt, “having been fired for having children (me) - which at the time in the military, was not allowed. She took on the might of the MoD and the establishment, and she won the biggest pay-out in history for sex discrimination at the time, paving the way for thousands of women to sue and win similar awards.” 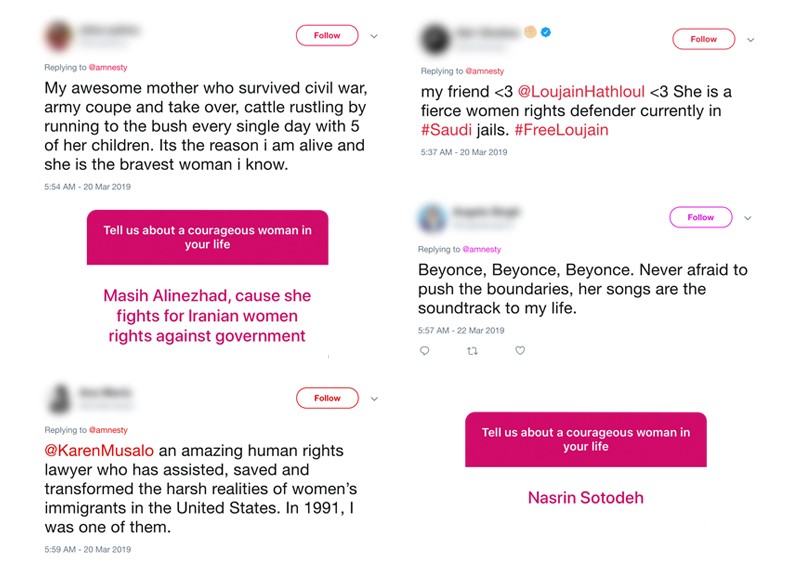 It shouldn’t be surprising that women and courage are seen almost as synonymous. As one Twitter user commented, “All women are courageous.”

They are because they have to be. The landscape for women is harsh. According to the UN, 1 in every 3 women globally has experienced gender-based violence. This violence extends to the online sphere: Amnesty’s 2018 study of women journalists and politicians in the USA and UK revealed that a woman received a toxic tweet every 30 seconds. And according to that same study, black women were 84% more likely to receive abuse online than white women, showing clearly the barriers that women with intersecting identities face.

Women who dare to put their heads above the parapet and speak out against discriminatory laws or hostile policies are at even more risk. Front Line Defenders’ 2018 analysis has shown that women activists are far more likely than their male counterparts to face sexualised smear campaigns, sexual assault and rape, and their children being targeted. With government leaders increasingly degrading women publicly, cutting funding to reproductive health services, targeting communities of colour and rolling back LGBTI rights, the climate for women who speak out is even more poisonous.

It’s no surprise, then, that among the many responses we received were the names of these equally courageous women: Saudi right-to-drive activist Loujain al-Hathloul who is currently in prison for “promoting women’s rights”; Nasrin Sotoudeh, recently sentenced to 38 years and 148 lashes for criticising Iran’s laws forcing girls as young as nine to wear the veil; journalist Masih Alinejad who also campaigns against Iran’s forced hijab laws; Marielle Franco, politician and advocate for Brazil’s poorest, who was shot dead last year; US whistleblower Chelsea Manning; Mozambique’s Cidia Chissungo, a youth activist helping activists in the region and currently supporting victims of Cyclone Idai; Moroccan social justice activist Nawal Benaissa; and many more brilliant women defending our rights.

If anything, we learned that there are brave women everywhere. They may not admit to it, but given a certain set of circumstances, they will rise up to do what’s right.

“I wouldn’t say I felt brave, but I suppose I had to be,” says Nichola Cannock. “I knew the establishment would throw everything at me – and they did. But I felt so strongly that I and other women shouldn’t be discriminated against for having children, and that was worth the fear and vilification.”

Loujain, Chelsea, Marielle (if she were still with us) and, yes, mums of this world would probably agree. Bravery is not a mantle to be worn. It comes when you need it, whether you seek it or not. Somewhere within us, we all have the capacity to be brave.

Sierra Leone: Rape and murder of child must be catalyst for real change

OPED: With a long-running armed conflict in the Northeast, Nigeria risks losing a generation of boys and girls